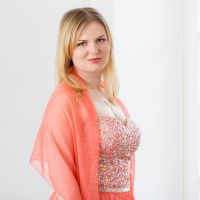 Born in 1985 in Kola, Russia, Soprano Alena Karmanova was accepted at the Lyceum of the Rimsky-Korsakov St. Petersburg State Conservatory in 1998 where she finished with honors in 2003. Subsequently, she successfully concluded her conducting studies in 2008. Karmanova additionally received musical inspirations through Master’s courses with Elena Obraztsova. She was active as a soloist with the St. Petersburg Opera from 2005 to 2007.

In 2009, Karmanova took on her singing studies at the Hochschule für Musik Hanns Eisler Berlin with Prof. Brenda Mitchell, Prof. Janet William and Anna Samuil. Since 2010, she has been regularly heard as a soloist with The Berlin Residence Concerts and with the Berlin Virtuoso Ensemble and has been additionally experienced in several university productions and at the Kammermusikfest Lockenhaus in Austria, among other things. Alena Karmanova was distinguished with the UNIT 4 Excellence Award in 2014.